A Talk with Ian McGaughey of The Michus

In 1983, two 13-year old boys formed a band that would record fewer than a dozen songs in their two-year history. Never performing live, the duo's creations were preserved on a cheap cassette tape. Typically, a handful of friends would hear the tape and the story would end there. Not so with this band.

The songs of The Michus would be played on college radio stations, even charting across the ocean. Web sites would be devoted to the band ensuring that their music lives on in perpetuity while a new generation discovers their unique sound.

The Michus consisted of Kurt Speers and Ian McGaughey. Kurt played guitar and sang, while Ian played bass and drums (if you call pounding on the floor next to a microphone playing drums). The music generally revolved around three of four chords and lyrics were improvised on the spot. They employed an astonishingly primitive method of multi-tracking, almost always allowing themselves just one take for each pass.

So why is it that such a simplistic duo with only a handful of crudely recorded songs has enjoyed nearly 20 years of longevity? We sat down with Ian McGaughey to get some answers.

Q: How did you and Kurt get started with the band?

Ian: Kurt and I had been friends since we could talk, and we hung out all the time growing up. When I turned 13 in 1983, my dad bought me an electric bass. The thing was huge. There's a picture of me with this thing somewhere and it's bigger than me. I remember it was a Diamond — that was the brand name.
Right around the same time, Kurt's dad bought him a Peavy electric guitar that had an amp built right into the guitar case. It was hilarious. So being two new musicians — and I use that term loosely here — it was only natural that we form a band.

Q: What exactly does the name "The Michus" mean?

Ian: Oh, man. That's a crazy one. Somehow we had made up a word — michi — that described people who were doing this pseudo-macho thing...like the guys who had pickup trucks jacked way up on huge tires or were basically like hicks from out of the hills. They were michi. The people who weren't like that were michu, so we were michus. Makes perfect sense, doesn't it? Well, it did in our 13-year-old minds.

Q: Who wrote the songs?

Ian: I think I was generally more behind writing the music, but Kurt was solely in charge of the lyrics. He had this natural genius for just coming up with this incredible stuff off the top of his head while the tape was rolling. It was incredible.

Q: Can you give me an example of what you call Kurt's lyrical genius?

Ian: Wow. I don't know where to begin. I guess I could start at the very beginning. We recorded a test track once, even before we had our instruments. I played a piano at my dad's house for music and Kurt of course sang. It was called "Joe Fred" and was only rediscovered a few years ago. I remember his lyrics word for word.
This is the story of Joe Fred.
He was born in a house.
He killed his mother and shot his dog

Then he went away. 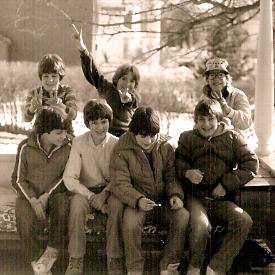 (Kurt Speers, top row on left, next to Ian McGaughey hang out with friends around the time of the first Michus recordings)