A Talk with Ian McGaughey of The Michus, p3 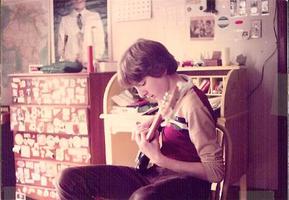 Q: Did you take lessons for floor drumming?

Ian: Very funny. I'm actually self-taught, thank you (laughs). I think you could say our sound matured when we got the drum machine in '84.

Q: Are those real drums on "Dirty Cigars?"

Ian: Yeah. Kurt's twin brother Karl was given a drum set for Christmas or something, so Kurt let him sit in on "Dirty Cigars" along with guest vocalist John Theisen. I remember Kurt hated how Karl's drums sounded, calling them a "tin can orchestra." I believe John's lyrics were inspired by a Rodney Dangerfield routine, though I may not be remembering that right. Not our finest effort.

Q: You guys stopped recording in early '85, but the music has enjoyed an amazingly long life, especially considering that you never played live or had any kind of official — or unofficial for that matter — releases. You just had a tape of a handful of songs. How would you explain The Michus' longevity?

Ian: An abundance of questionable taste in the world. No, I think the catalyst was the creation of a tape called "Local Bands" that was sent to our local college radio station in 1985. It was a collection of songs from different bands that my friends had, and it included The Michus. My friends and I would call up to request our songs, and they would play them. I think some of the DJs must have started playing them on their own because The Michus made the top-five playlist for a month in 1985. I remember coming home from a family vacation, turning on the radio and sure enough, The Michus were playing.

Q: How did the music get over to Europe?

Ian: This is really the amazing part. The Michus would almost certainly have suffered a quiet death if not for the evangelistic work of a man named Yoktan Haddad. I believe a mutual friend turned him onto The Michus and he quickly became our biggest fan. He either traveled or lived in Spain for some time and was involved in some radio stations over there. He got The Michus played enough that they appeared on the charts — or so the legend goes. It's fair to say that any of The Michus post-1985 success is solely attributable to Mr. Haddad.

Q. Have you ever met him?

Ian: Yes, I did. I met him in the late 90's. He came up to my place in Saratoga with our mutual friend Kris. He was great. I remember him saying that it was an honor to meet me, which surprised me since I was so fascinated to meet him. I played him some music I had been working on at the time, and I had the distinct sense he wasn't very impressed. I think so much of what makes The Michus "The Michus" is Kurt. That along with our innocence and youth — and questionable musicianship. The music I was making at that time had none of those elements, except for the questionable musicianship.